If you are neutral in situations of injustice, you have chosen the side of the oppressor.
Desmond Tutu 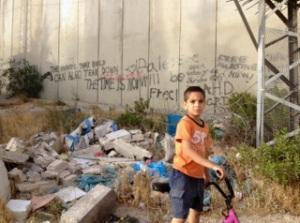 (and, then there is ignorance…)

I sit here on the back deck of my home listening to bird sounds, the rustling of leaves from a slow-moving breeze and the distant movement of traffic.  I see moving light on the pond at the bottom of the field below.  I look out onto gardens filled with varying shades of yellow, white, green, and my eyes rest on the peaceful face of the Buddha statue under the apple tree.  What teaching do you have for me this day, dear Siddhartha Gotama, while bombs are falling in Gaza and the people who live there are dying, injured, displaced from their homes?  While, too, my friends in Israel suffer from fear and despair wanting to do something, but feeling ineffectual?

I wake up at night and immediately my head is filled with worry and concern about the people of Gaza.  I check my Facebook to see what news has been posted (I have learned not to rely on the mainstream media for accurate reporting), to see if Khitam has written anything—to know she is alive, uninjured; to let her know I am listening and speaking up.   I look for messages from Rose, my friend from Ramallah; Hamde, from B’ilin.  I follow other friends in human rights organizations I trust and respect:  Jewish Voice for Peace, US Campaign to End the Occupation, Interfaith Peace-Builders, B’Tselem, If Americans Knew, Breaking the Silence and others.  And “share” what I learn (some would say too much).  I read articles and essays and look at photographs that I don’t want to look at.  The most painful ones for me are pictures of mutilated bodies of babies and little children and the anguished faces of their tormented parents.

A couple of days ago, Bob received a call from our friend, Yasser, telling us that two 14 year-old boys from his town, Al-Ram, had just been shot dead by Israeli soldiers (we still haven’t heard about this in the news).  Bob could hear gunfire in the background along with the sound of fear and despair in Yasser’s voice.  Yesterday, we received an email from our Israeli Jewish friend, Iris, who lives just outside Tel Aviv.  She, too, is despairing and deeply frightened.  She and many of her Israeli friends are frantically meeting, planning and organizing protests rallies and events. (We don’t hear about these actions here in our media either.) Her son has refused to sign up with the Israeli Defense Force (IDF).  He won’t have blood on his hands, be part of actions he believes are morally wrong.   He is one of many Israelis doing what he can to end the horror that can have no end from continued acts of horror.  And, as an Israeli citizen obliged to serve his country, there will be consequences.

As I sit in the quiet and safety of my home, I feel tired, deeply sad; and I feel the desire to turn my head away from it all.  (Quickly the thought arises—with judgment and scorn— “YOU are tired!?”)  I do know I need to rest and spend even a few minutes by the pond at the bottom of the field behind my house—to rest in “The Peace of Wild Things”.*  And, then feelings and thoughts of shame arise: this country to which I pay taxes uses over 3 billion of those tax dollars each year to fund the government and military that is massacring the people of Gaza, taking without permission or compensation land that is not theirs, intimidating, restricting, constricting the lives of an entire group of people, letting them know through speech and actions—“you do not belong here.”   My heart screams in agony for the people of Gaza, for the people of Palestine—for the ignorance that perpetuates the violence and occupation of the Palestinian people…that affects the people of Israel and the sustainability of the state of Israel…that affects us all.

It’s all there in what is unfolding, isn’t it?  The truths of kamma (cause and effect), anatta (not-self and the illusion of a sense of identity and separateness), annica (impermanence), dukkha (unsatisfactoriness and suffering).  And, ignorance, like the trump card, is the most powerful part of it all.

I keep hearing in my head the words of Jesus as he was dying on the cross:  “Forgive them Father for they know not what they do.”

*title of a poem by Wendell Berry